An “international coordination” of the far-right? 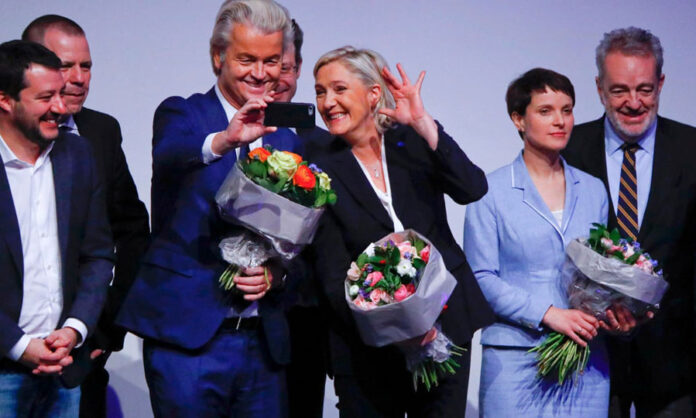 In the recent period, three international events are a source of optimism for the battle against the far-right and neo-fascism:

These are more or less the good news on this front.

Basically, a spectrum of genres of the far right internationally (Neo-nazis, ultranationalists, populists, ultra-conservatives, alt-right, white supremacists, you name it), have in a lot of cases imposed their political agenda and contributed to the shift to the right of the political landscape. They have won seats in parliaments, they participate in governments, they create new formations and adapt to the new conditions.

Here’s a few examples to illustrate the above observations:

Normalisation of the far-right

We have today an obviously very different picture compared to the early 1990s. That was an era when the far-right came to the fore in a few countries at first (Jean-Marie Le Pen in France, Georg Heider in Austria, Gianfranco Fini in Italy, etc.). As a result, the so-called “democratic forces” first panicked, then started to move to the right, allegedly in order to “remove the ground” under the far-right’s feet. This had the exact opposite effect and in fact strengthened them.  Then, under the weight of the economic and social crisis of 2007-2008, the “centre” collapsed, leaving all the avenues open for the far-right.

Today the far-right is established as a regular element of the political landscape. On top of that, a number of its most reactionary ideas are acknowledged as rational political positions among the broader population.

The vast majority of these formations are originating from small fascist groups and parties that emerged after the end of World War II. They gradually polished their political discourse, not because they stopped being fascists, but only after they realised that they had to “fix” their political facade and hide their Nazi past, in order to address wider sections of the population and broaden their political appeal.

The well-known mix of xenophobia, sexism, homophobia, Islamophobia and anti-communism is enriched by extending their intervention to new fields of action: they interfere with the content of school education, they organise actions against abortion and infertility, they create online structures and media with a huge impact on millions of people, etc.

The political vacuum on the left and more recently the pandemic have favored all sorts of far-right formations in several places in the world.

Figures such as Zemmour and Meloni reveal a trend towards further “radicalisation” of the far-right, sidelining its traditional leaderships.

Le Pen‘s “National Rally” and Salvini‘s “Lega” are typical examples. When they adopted adjustments to their approach (mainly in what concerns their countries remaining  within the Eurozone and the EU), they faced new competing figures and personalities gaining traction, who represented the “far-right” of the far-right.

This is confirmed by the example of Eric Zemmour, who has already gained the favor of Marine Le Pen’s father, 93-year-old Jean-Marie Le Pen, who told Le Monde:

“Marine has abandoned her strongest positions and Eric has taken over her pitch… If Eric is the best-placed candidate in the nationalist camp, of course I will support him… My only difference with Eric is that he is Jewish. So, it’s hard to call him a Nazi or a fascist. And that gives him more freedom.”

Efforts for an international coordination of the far-right have been underway for several years at different levels.

In 2018, the French public television channel ARTE and the European Parliamentary Forum on Population and Development revealed the existence and internal procedures of a pan-European Christian far-right network called “Agenda Europe“. Agenda Europe, created in 2013, convenes an annual secret “Summit” in various European capitals, bringing together 150 individuals and organizations from the most prominent anti-abortion rights and homophobic groups, which they call “the pro-family movement.”

Steve Bannon, Trump’s former chief strategist, tried to set up an organisation called “Movement” in Europe; at first, it was supposed to be a “consultancy” company. But the real objective of this organisation was to transfer his election expertise, already applied in the US and Brazil, to European nationalist movements, which he called “right-wing populist”.

It basically sought to bring together, under a unified platform, the parties that call for strengthening the national sovereignty vis-à-vis Brussels, adopt a hard line on immigration, demand strict border control and forge Islamophobia.

Bannon was aspiring that these parties would take at least one third of the seats in the European Parliament (EP), which would eventually turn them into the largest EP political group.

In this context, Bannon founded the “Institute for Human Dignity”.

This was a school for far-right militants, placed in an abandoned 13th century monastery on a mountain top in Italy, premises that are situated two hours southeast of Rome, at a spot where there is no mobile phone signal and one guardian, a monk in his nineties.

The plan failed though and Bannon was arrested for a fraud connected to the “We Build the Wall” campaign, an online fundraiser supporting the controversial U.S.-Mexico border wall.

“Prosecutors alleged Bannon diverted more than $1 million to pay a co-conspirator and cover hundreds of thousands of dollars in personal expenses. They alleged the victims, including some in New York, were falsely told that all the money donated would go toward the construction effort.”

Of course, he got discharged and was pardoned by Trump in January 2020 just days before the latter lost the US presidency.

On July 2, 2021, further to an initiative by Matteo Salvini and Marine Le Pen, 16 parties from 14 countries held a meeting followed by a joint statement calling for an EU based on sovereign member states instead of a federal Union.

On December 3rd and 4th, 2021, leaders from 13 European far-right parties met in Warsaw. The participants list included, among others, the Hungarian Prime Minister Viktor Orbán of Fidesz, France’s Marine Le Pen of the National Rally (RN), Santiago Abascal of Spain’s Vox and representatives of the Austrian Freedom Party (FPÖ). The Alternative for Germany (AfD) and the Italian far-right were not represented in this meeting, as both Matteo Salvini of the Lega and Giorgia Meloni of the Brothers of Italy were absent.

The meeting’s outcome was limited to a general statement calling for a new meeting in Spain in February 2022.

Apart from that, it is also worth mentioning the efforts of the Spanish Vox in Latin America, which actually constitute an attempt to coordinate the far-right parties from Latin America and the Iberian Peninsula.

Today all the above mentioned parties participate in two different groups in the European Parliament, Identity and Democracy (ID) and European Conservatives and Reformists (ECR).

The ID includes Le Pen’s National Rally and Salvini’s League, whereas the ECR includes the Polish PiS, which holds a majority in the group, and the Italian “Brothers of Italy”.

In any case though, the far-right’s ideology and values have nothing to do with real internationalism- let alone with concepts such as solidarity, equal cooperation, etc.

For example, on national issues, each far-right group believes that its own countries’ positions are correct, and everyone else’s’ are wrong. They also consider the history and cultural heritage of their own nation superior to those of any other.

They even have differences on important issues related to economic policy and geopolitical alliances.

Alternative for Germany supports the policies of the German government while Le Pen and Salvini see the austerity measures imposed by Germany on the EU countries as the origin of their countries’ current problems.

The Polish government is afraid of Russia, while Orbán and Le Pen stand with Putin. Marine Le Pen has actually been publicly accused of receiving massive Russian funding.

Meloni’s Brothers of Italy try to look like an anti-systemic force, while Salvini is participating in the government led by former ECB President Mario Draghi.

On the refugee issue, each far-right leader simply wishes to drive refugees out of their own country and just send them somewhere else. Hungary and Poland have taken the lead in rejecting any idea of a proportional distribution of refugees across all EU countries.

Therefore, cooperation between the European far-right parties is just an opportunistic alliance, in order for them to achieve better positions in the European Parliament and above all to get promotion or participate in governments.

We need to be alert

Despite this, they still remain an important danger for political and social freedoms across the globe.

These freedoms are even more fragile, because of the fragmentation of the Left and its weakness impeding it to widen its influence.

We should definitely not forget the pictures from the invasion of the US Capitol building by rampaging fascists and those from the attack on the offices of the largest Italian trade union CGIL in Rome. All of us who consider ourselves as part of the anti-fascist camp and, above all, all of us who want to overthrow the capitalist system, because we understand that this system is nurturing fascism and the extreme right – should work together in every way we can in order to prevent the fascists and the far-right becoming an established and dominant force in our societies.