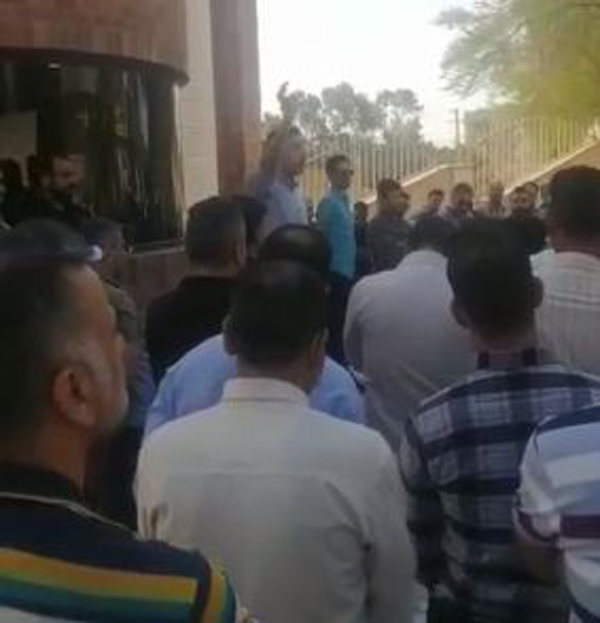 The workers of the Iran National Steel Industrial Group (INSIG) in Ahvaz began their latest series of protests on July 23rd. Following the fifth day, Wednesday July 27th, we received the following statement from a group of INSIG workers.

We, the workers of Khuzestan, have been subjected to the most severe oppression, discrimination and exploitation for many years, just like all others in our class. In order to change our conditions, we have been fighting against various mafias of power and wealth for many years and we have gained valuable experiences on this path.

The conscious majority of National Group workers do not, and did not, have the slightest illusions about the government and this or that minister, or the meetings of the Supply Council and the anti-labour institutions. We know very well that we must be united against the anti-labour interests of the employer and the government; and not bow our head or keep an eye on the closed doors of the meeting rooms, which we know will lead to policies that will worsen the existing situation and make us even poorer.

Instead of a job classification scheme, our alternative is an equal wage above the poverty line and housing and welfare facilities for ourselves and for all workers and employees and retirees.

We consider having an independent [labour] organisation and free elections [of representatives] as our and all workers’ legal and fundamental rights, and we will definitely make our best efforts to get them.

We firmly declare that, as in previous years, we will not allow the process of forming the ‘Islamic Labour Council’ to go ahead under any circumstances, and we will stand united against these tricks and conspiracies.

Share
Facebook
Twitter
WhatsApp
Viber
Email
Previous articleTurkey: The question of a mass socialist party and the creation of the Workers Party of Turkey (TIP)
Next articleInflation, debt, recession: the crisis of the capitalist economy rears its ugly head