18-O General Strike Shows the Huge Potential of the Movement 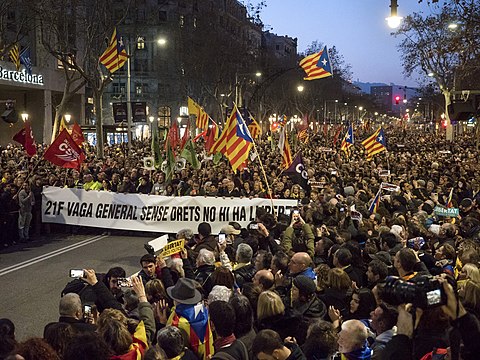 Aweek of mass protests in Barcelona and other main Catalan cities culminated on Friday, 18 October, with a general strike that saw over half a million people gathered at a rally in central Barcelona. They included tens of thousands who over the last few days had been marching down from other corners of Catalonia. The strike and the rally were strikingly peaceful, in contrast with the rioting that took place later during the night and on some of the previous nights. According to the police, around 4,500 people took part in the riots, that is, less than 1% of the total number of participants to the rally! However, the rioting has been massively over-represented in the Spanish mainstream media, with the traditional purpose of undermining the legitimacy of and popular support for the protest movement. Nevertheless, while the anger fuelling the rioting is understandable given the movement’s lack of political direction, building on the general strike would be a much more effective way to channel that anger.

The strike was called by independent trade unions, such as CSC-Intersindical, Intersindical Alternativa de Catalunya (IAC) and CGT, with significant rates of participation from various sectors: 60–80% in commerce, 43% in public education, 26.3% in healthcare, 30% among civil servants, 36% among the metro workers, and 90% among university students. Importantly, unlike the strike from the 2017 referendum, the workers at the SEAT plant, the biggest in Catalonia, also put their tools down.

The magnitude of this strike is all the more impressive given the lack of involvement from the leadership of the main trade union federations like the CCOO and UGT. Indeed, instead of supporting this strike, CCOO and UGT, have shamefully negotiated in the meantime a “declaration” with the Catalan bosses federations, calling for “political dialogue”. This reflects the wider capitulation of the official leaders of the left and the labour movement in relation to the Catalan question. Their abstract calls for “dialogue” and “political solutions” are pointless in face of the repression of a Spanish state that has given longer prison sentences to the elected leaders of the independence movement then to most of the authors of the 1981 attempted military coup! This is a state that justifies these long sentences on the basis of the “material opposition” of the pro-independence leaders to the law enforcement institutions, which opens the dangerous path for the potential criminalisation of any future mass mobilisation, including strikes or occupations. This is a state that fires rubber bullets at its own citizens and where members of the police forces are openly fraternising with fascists thugs.

More fundamentally, it is a state that still contains at its very top a Francoist, ultra-nationalist faction that would never accept any “institutional” path to Catalan independence. They are now temporarily colluding with the PSOE caretaker government, which favours the framing of the upcoming general elections on 10 November around a false sense of national unity versus the separatist threat. It is a useful way for PSOE and the rest of the political caste to divert attention from the persistent socio-economic issues affecting the majority of workers and youth, including a decline in an already sluggish economic growth, from 0.6% in June to 0.4% as of September 2019. These parties are now trying to outdo each other in posing as the defenders of “Spanish unity” and the Constitution. The Spanish ruling class is in fact divided, lacking any coherent vision for how to run the country’s economy, with a potential national unity government between PSOE and PP having very fragile foundations, especially in the perspective of a new economic crisis.

The nationalist tactics currently employed by the various sections of the establishment is likely to backlash against them. Indeed, in the workplaces, schools and on the streets, the events are starting to develop along a left-right cleavage that goes beyond Catalonia: on the one hand, mass solidarity demos in other main cities across the Spanish state, including Madrid, Bilbao, San Sebastian, Valencia and Zaragoza, where republican and anti-fascist flags prevail; on the other hand, police repression, fascist assaults, and right-wing politicians calling for the activation of Article 155 of the Constitution that would suspend Catalan autonomy. The leaders of the left are even more politically bankrupt in the context of such a growing polarisation, adopting a false neutrality instead of decisively standing on the side of the mass movement.

The protesters on the streets of Barcelona are aware of this repressive and reactionary character of the Spanish state as well as of the bankruptcy of the left leadership. This is particularly the case with the fresh layers of youth that are coming into struggle. While relatively or even completely new to political activism, they have no illusions in and patience for the “legal” path to independence. They have no illusions either in the political representatives of the “Indignados” generation, such as Pablo Iglesias and Ada Colau, who have made it into mainstream politics and become part of the same establishment they were supposed to oppose. That was best illustrated by the hostile reception received on the Saturday demo in Barcelona by Gabriel Rufian, the once popular leader of the social democratic Esquerra Republicana de Catalunya (ERC). Over the past two years, his party has adopted a pessimistic view of the question of independence, which it now sees as a long-term objective.

More importantly though, despite its left-wing image, since 2018 the ERC has been, together with the centre-right liberals from Junts per Catalunya (JxCAT), part of the governing coalition implementing cuts across the region. Indeed, for much of the enraged youth taking part in this mass protests, the drive for independence is to a significant degree fuelled by the social and economic issues that they and their families are confronted with than just Catalan nationalist sentiment. As an 18-year old student from Girona told a reporter from Público, Spanish democracy “is a joke, not an economically secure country. I became an independentista thanks to the Spanish institutions, not the Catalan ones”. Indeed, the pro-independence trade unions that called the Friday strike, chiefly CSC-Intersindical and IAC, said their key motivation was linked to the demands for a higher minimum wage and measures promoting equality in the workplace.

All this shows that workers and youth are increasingly aware that the official leaders of the independentist camp are not only incapable of leading the struggle for independence to a successful conclusion but also that the kind of independent republic they have in mind is one in the service of the elites and not the ordinary people. Catalan independence is worth fighting for, though, on the basis of the fundamental right to national self-determination, of course, but mainly because it would provide the historical opportunity to build a different type of society, where the key sectors of the economy are taken in public ownership and under democratic control to serve the needs of society.

However, at the moment there is no mass organisation calling for that, given the aforementioned bankruptcy of the official leadership of the left. There is an obvious political vacuum in the current protest movement, reflected also on the mass rally on Friday, where the few and relatively small left groups had no materials pointing the way forward. But there is a huge appetite for that, especially among the younger participants. Thus, the movement is currently lacking a political programme and strategy, as well as democratic structures to allow the development of that programme and strategy — but the more politically conscious sections of the movement are clearly thirsty for some political substance and direction.

Candidatura de Unidad Popular (CUP) needs to play a more decisive role in that regard. They could use their elected representatives and sizeable rank-and-file to intervene boldly and call for the establishment of democratic committees that would structure and coordinate the movement around a radical strategy and programme for independence. Socialismo Revolucionario is fully committed to working with any groups resonating with such an approach, which aims to build a democratic, militant movement fighting for an independent and socialist Catalan republic.